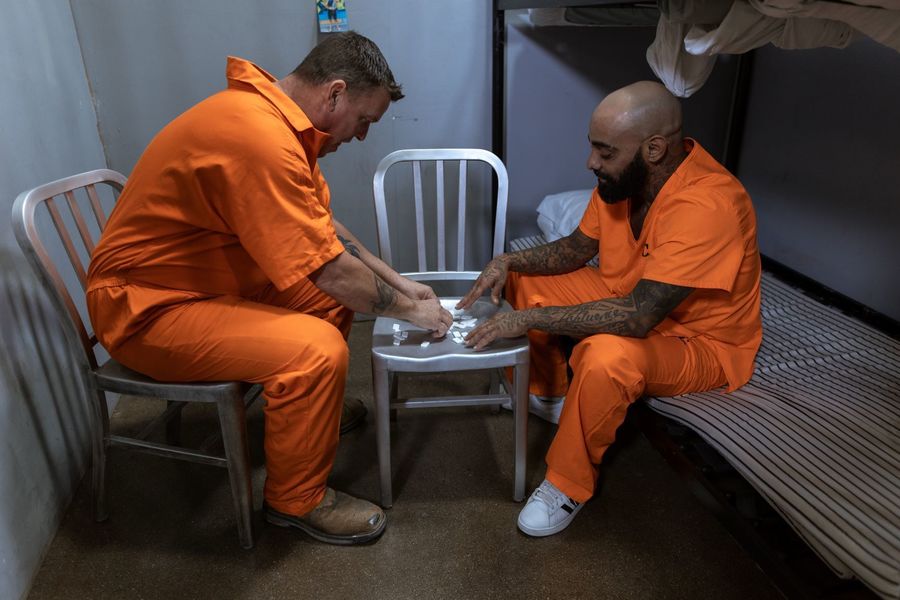 “In this program, we break down the patterns that keep them coming back to jail again and again. What is not healthy about their behavior and how can we help them break that cycle? We help them develop coping skills, life skills, and a level of excellence so that they can look at themselves in the mirror every day and say, ‘You know what? I am a man of excellence.’”

Solitary confinement is one of the most widely used forms of disciplinary and behavior change practices in the U.S. criminal justice system. The Federal Bureau of Justice estimates that over 80,000 inmates are held in some form of solitary confinement every year.

These inmates are typically removed from the general population as a punitive measure or because they have a history of harming others. Once in solitary confinement, they have very limited interaction with other people. They may leave their small cell—often the size of the average home bathroom and without windows—only once a day for an hour or so. The rest of their time is spent inside and alone, waiting for their sentences to pass.

Though the practice of solitary confinement is widely used, we know that it does not work to encourage social/emotional change. In fact, solitary confinement can have severe adverse effects on a person’s mental health and interactions with others. And when inmates don’t receive support for addressing underlying trauma, mental illness, substance abuse, or other risk factors, the likelihood that they will be involved in criminal activity again increases. A study of Texas inmates who were released from prison directly from solitary confinement found that 61% of them were rearrested within three years, compared to only 49% overall.

We need to find a better way to reduce recidivism, break the culture of generational crime, and help incarcerated individuals build healthy behaviors that will support their success once they transition back to the community. Research from the U.S. Department of Justice shows that programs involving behavior therapy may be the key. Participants in such programs have been shown to improve their social and emotional reasoning—thereby strengthening their ability to solve problems, plan for the future, and anticipate the likely result of one’s actions. It is no surprise, then, that program participants also saw lower recidivism rates than their peers.

To really set inmates up for success after their release, jails and prisons must be places of rehabilitation rather than warehousing. We need a better understanding of what really helps inmates learn the life, communication, and conflict-resolution skills that will decrease their likelihood of engaging in future crime and returning to jail. The promising results of behavioral therapy programs as an alternative to solitary confinement shows us a possible way forward. But more research needs to be done on the exact components of these programs that make the difference.

The Lubbock County Detention Center offers a variety of services and programs to inmates with the goal of improving their lives post-release. One such program is Step Up—a Rational Emotive Behavior Therapy (REBT) program aimed at helping incarcerated participants develop life, communication, and non-violent conflict resolution skills. Program participants live together in the same unit and participate in daily classes in subjects such as conflict resolution, anger management, therapeutic writing, and etiquette. Undergirding this program is a deep belief that everyone has worth, there is hope for the future, and small things done little by little will change the world.

How does inmate access to a program focused on emotional response management and peaceful conflict resolution influence behavior during and after jail?

LEO’s evaluation of the Step Up program features both a quasi-experimental (retrospective) study and a randomized controlled trial. Current inmates at the Lubbock County Detention Center who have been referred to the program and who meet basic stated requirements (such as complying with gang intelligence screenings) are eligible to participate. Eligible inmates are entered into the lottery for Step Up even if they do not consent to the research study, so that they still have a fair chance to participate in the program even if they don’t wish to participate in research. However, data is only collected on those who consent to participate in the study.

Because demand for the Step Up program is greater than the number of spots in the program, LEO uses a lottery to randomly assign eligible inmates to the treatment and control groups. When a spot becomes available in Step Up, LEO randomly sorts the next two individuals on the wait list. Those who are accepted into the Step Up program are part of the treatment group. Those who are not assigned to enter the program make up the control group.

At the conclusion of the study, LEO researchers will compare the number of behavioral or violent incidents while at the detention center, as well as recidivism outcomes, between those who participated in Step Up and those who did not.