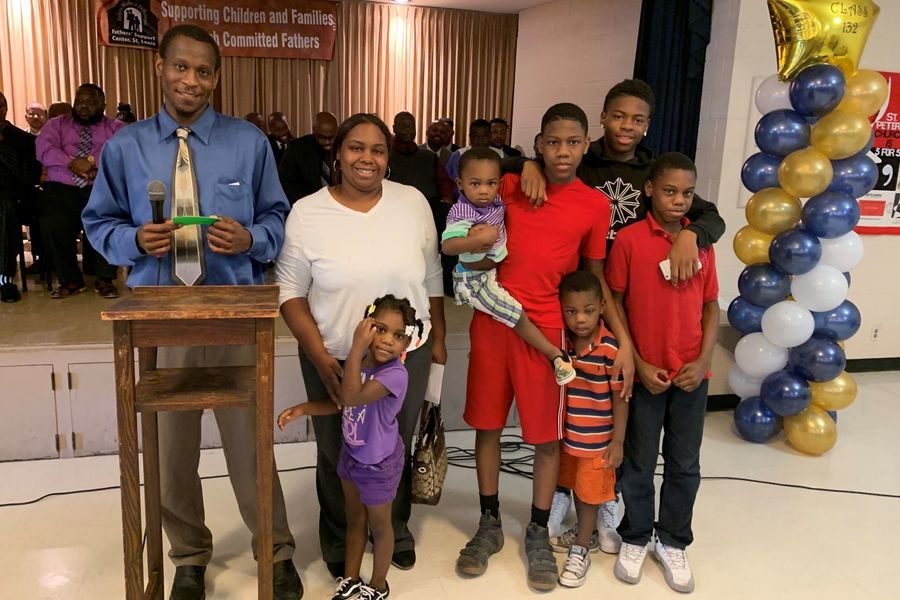 “We believe that the progress we have made in the reduction of recidivism is a game changer for St. Louis. Imagine how the country could thrive if 80% or more of its released citizens never return to the system. Ask yourself, how much better would our families and communities be?”

In America, 15 million children are growing up without their fathers at home. A whole host of problems stems from this, for both the solo mom and the child. The financial uncertainty of a single-earner household is often solved by taking on more than one job or one with longer hours. This results in less quality time between parent and child. And the National Fatherhood Initiative reports that growing up without a father at home can have a detrimental impact on everything from a child’s social/emotional development and high school persistence to avoiding drugs and alcohol and maintaining a healthy weight.

Growing up apart from dad can have far-reaching consequences for a child. And since the 1980s, the number of children growing up with fathers who are not at home because they are incarcerated has grown by more than 75%. Further, the National Institute of Justice estimates that at least 40% of all incarcerated fathers are Black, and Black children are 7.5 times more likely than white children to have a parent in prison. Like poverty, involvement with the criminal justice system can cycle through generations; children with an incarcerated parent are more likely to become involved with the criminal justice system themselves.

These are dire figures for any family impacted by incarceration, but especially for those living in states with higher-than-average incarceration rates, like Missouri. In the city of St. Louis, about 17,000 people cycle through the local criminal justice system every year. That means a lot of Missouri children, and particularly children of color, at risk of the unique struggles associated with having a parent in jail.

Programs that help men and women successfully transition from incarceration back to their communities have emerged as a critical tool for family well-being. Rosenfeld et.al estimate that 15-20% of all adult arrests in a year are of people who have already served time. These recidivism rates have stayed persistently high throughout the last decade. We need to make a concerted effort to break the cycle of recidivism and generational involvement with the criminal justice system for all adults, but especially for fathers, who account for 92% of imprisoned parents.

Is it possible to create a path for fathers to return home post-release and add to the well-being of their children and families? Research suggests that many inmates who are fathers most likely grew up in fatherless households themselves. How can we disrupt this cycle and support fathers as they seek to be fully present in the lives of their children post-release?

Reentry programs are showing us the way to help formerly incarcerated fathers, their children, and their families thrive. But we need to know definitively if a reentry program model that goes beyond the traditional services of education and employment services to focus on preparing men for the most important work they may ever do—raising healthy and happy kids—can be the answer.

The Fathers and Families Support Center (FFSC) believes that the family unit is key to transformation for fathers leaving prison. Its fatherhood program serves incarcerated men at the Transition Center of St. Louis (TCSL) as they prepare for reentry into the community, augmenting the center’s core curriculum with special sessions geared at preparing men to integrate back into family life. Participants attend more than two dozen small group sessions over the course of six weeks, focusing on everything from the challenges of post-release life, to fatherhood, manhood and relationships, personal responsibility, job readiness, and communication skills. Men in the program learn how to dress for professional environments, how to budget, and—perhaps most importantly—what it feels like to be emotionally supported for the first time in their lives. FFSC believes this last part is the catalyst of the whole model, filling fathers up so they can pass that emotional support on to their children.

What is the impact of the FFSC fatherhood program on formerly incarcerated individuals’ recidivism, employment, and family engagement outcomes?