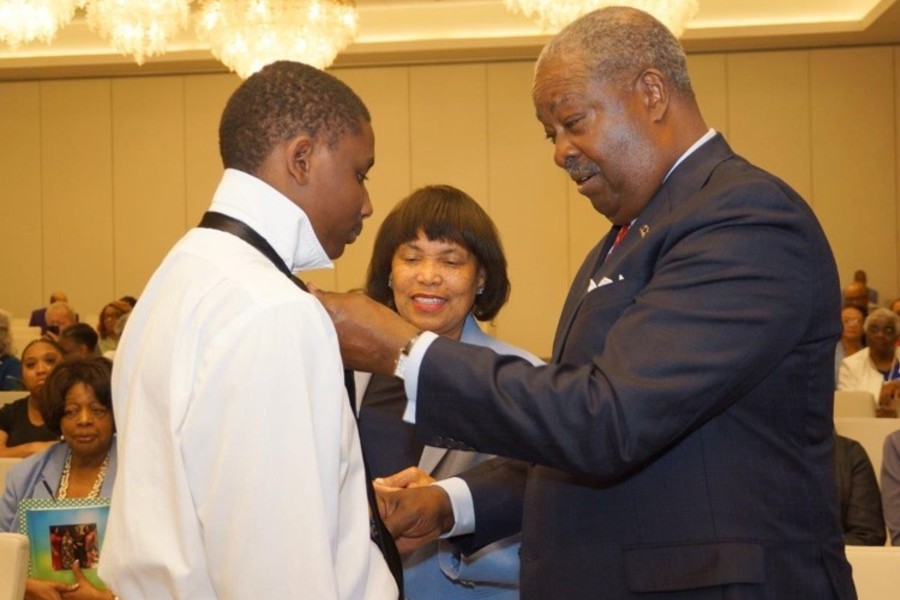 “We’re asked to implement our program all throughout the country. Just here in Jackson, the superintendent wants us in every school, but we don’t have the resources to do that. As we look to grow our mentorship program for boys and young men of color, we want to show why it works. And the advocacy and policy implications in addressing systemic racism will be even broader with evidence of the effectiveness of our program.”

Mississippi high school graduation rates have risen over the last decade, but many students still face barriers that stand in the way of their academic success and social development. These barriers most often impact low-income students from disinvested communities, and the effects are long-lasting. Over time, these students fall behind their peers when it comes to academic performance, and face below-average levels of high school completion.

In 2019, Canton Public School District reported a dropout rate of 20.9% and Jackson Public School District reported a dropout rate of 18.7%--making these school districts the third- and eighth-lowest in the state when it comes to high school graduation rates. But graduation rates alone are not the problem. They signify persistent issues with chronic absenteeism, disciplinary infractions, and below-average proficiency in math and science that can mark a student’s school years. These issues are particularly pronounced for young males of color in Mississippi, and reflect a broader pattern of racial gaps in outcomes like school attendance, educational achievement, and social/emotional development.

While lower than in years past, racial and ethnic disparities in academic performance persist, as evidenced by test scores. And when it comes to school disciple, actions like suspensions are consistently imposed on Black male students more often than other groups of students. In the 2015-2016 school year, for example, while Black students comprised 15.4% of all U.S. public-school students, they accounted for 37.2% of students who received one out-of-school suspension. Disparities remain among youth of racial and ethnic minority groups for dropout rates, too. In 2014, the average high school dropout rate was 6.5% percent overall, while Black youth experienced a 7.3% dropout rate.

These disparities are alarming from a social justice perspective and have persisted despite increased spending on education and related programs. Adding to this alarm is that research consistently shows that academic performance, attendance, social/emotional development, and school persistence all impact a student’s future economic success and well-being.

In the short-term, youth who do not graduate high school have less opportunity when it comes to post-secondary education and job prospects. But the effects of dropping out can be more widespread than that. Youth who don’t graduate have lower employment rates, increased chances of poverty, increased likelihood of engagement in criminal activity, and higher rates of mortality as adults. Disciplinary actions—especially those that involve “out-of-school” time—exclude students from valuable time in the classroom, and are not surprisingly associated with subsequently lower-quality learning resources available to that student and a greater likelihood of leaving school altogether. Longer-term negative outcomes, such as involvement with the criminal justice system, are more likely for students who have been suspended or expelled from school.

We need to understand how we can improve young people’s behavioral and academic outcomes—especially for students of color. Their futures and our communities depend on it.

First offered by the Jackson, Mississippi-based Juanita Sims Doty (JSD) Foundation in 2013, the Ambassadors of the Evers Academy for African American Males (A-TEAAM) mentorship program provides one-on-one and group support to young males of color through a “village” of mentors that engages students to support their leadership and character development.

Students who participate in A-TEAAM are called “ambassadors.” They engage in a regular curriculum focused on key areas like responsibility, respect, work ethic, communication, initiative, perseverance, and finding a career and purpose. Alongside their work with their mentors and other ambassadors, A-TEAAM program also benefits from parent and teacher involvement. A-TEAAM’s goal is to equip students with the skills, knowledge, and support needed to increase their self-esteem and confidence to overcome obstacles.

How does providing mentorship, character, and leadership development programming impact academic and behavioral outcomes for young males of color?

The A-TEAAM study is a randomized controlled trial. As has been done for this program before the study began, students are referred to the A-TEAAM program by school administrators.

Because the JSD Foundation does not have the capacity to serve all students who are referred to the program, these students enter a lottery to be selected to become an A-TEAAM ambassador. Students who are randomly selected participate in the A-TEAAM curriculum and receive mentor support. They become members of the treatment group. Those not selected by the lottery become members of the control group. They do not receive A-TEAAM program services, but still have access to other services in their schools.

Following the conclusion of the study, LEO researchers will compare student outcomes across both groups.