The President’s proposed fiscal year 2020 federal budget includes no growth in funding for HUD-VASH - the supportive housing voucher program for homeless veterans - eliminating new vouchers for anyone not currently holding one. William Evans, co-founder of the Wilson Sheehan Lab for Economic Opportunities (LEO) at the University of Notre Dame, was on Capitol Hill in October to share his research showing that the program effectively reduces veteran homelessness, and to demonstrate to lawmakers the importance of evidence in considering support for veterans now and in the future.

Homelessness is a persistent public health issue and veterans are especially vulnerable to experiencing homelessness. The Housing and Urban Development–Veteran Affairs Supporting Housing Program (HUD-VASH) pairs housing vouchers with case management services to get homeless veterans into safe and stable housing and on the path to reaching other self-sufficiency goals.

Evans and his study co-authors found that for every HUD-VASH voucher distributed, one fewer veteran is living on the streets. The program is especially effective for the chronically homeless. The study concluded that HUD-VASH may have lowered veteran homelessness by as much as 70% in the past decade.

Despite this proven success, the President’s proposed federal budget eliminates funding for new HUD-VASH vouchers. This is concerning in light of the recent rapid growth in the populations of post-9/11 veterans and those discharged from the military with a service injury. 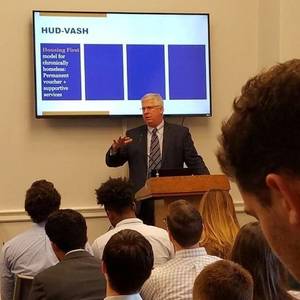 “The Housing First model that HUD-VASH employs is a leading example of the potential impact of evidence-based public policy,” Evans remarked. “We’re building a really robust body of evidence that shows that getting people into housing first, and then working on issues like mental health and sobriety and employment, is an effective strategy to reduce chronic homelessness.”

The briefing gave CCUSA the opportunity to organize congressional support around the HUD-VASH program. CCUSA helped draft a letter to the House and Senate Appropriations Committees explaining the plight of veteran homelessness, citing LEO’s research, and requesting $42M for HUD-VASH in the 2020 federal budget. Eighty-two congressional members signed their names to the letter advocating for program funding. CCUSA reported that having evidence to prove the program’s success helped get these members on board.

While in D.C., Evans also shared his research results with representatives from Indiana Senator Todd Young’s Office, Indiana Representative Jackie Walorski’s office, HUD, the Department of Veterans Affairs, the U.S. Interagency Council on Homelessness, and the House Financial Services Committee’s Subcommittee on Housing. He was met with bipartisan support for LEO’s focus on building evidence to support policies and programs that serve vulnerable populations.

“I was encouraged to hear that the VA is committed to finding ways to prevent veteran homelessness rather than just treat it,” said Evans. “We also need to learn more about the cost benefit of HUD-VASH expenditures.”

LEO is working on a proposed new line of research examining if VA data about medical care can be used to predict which veterans are most likely to become homeless, so a prevention plan can be put in place before the crisis happens. LEO is also exploring partnerships with foster care agencies to see if housing vouchers are an effective intervention for other vulnerable groups like youth aging out of foster care.