LEO was honored to cohost, with The Rooney Center for the Study of American Democracy, an event for University of Notre Dame students featuring Former Speaker of the House Paul Ryan. The event, “Evidence and Policymaking in the Age of Big Data,” was held on September 13 on the Notre Dame campus. Ryan, who serves on LEO’s board and is a Professor of the Practice at Notre Dame this academic year, spoke about how research and evidence-based policy can have a meaningful impact on poverty. 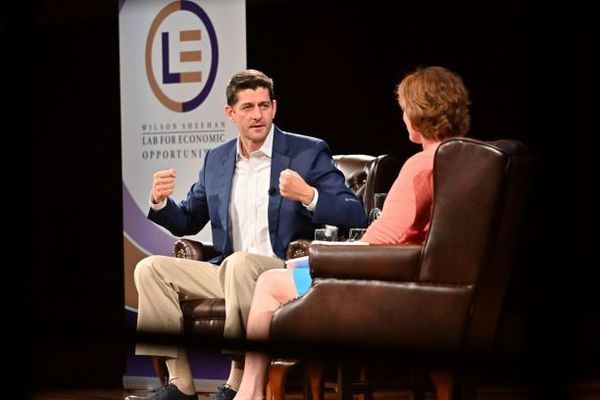 Ryan described his early days as Speaker of the House. “I wanted to understand what all the federal government does to address poverty.” From a list of more than 95 government programs, he “found one percent were measured as effective.”

Then Ryan met LEO co-founder Jim Sullivan, who told him about LEO’s work in fighting poverty, but also shared how restricted access to federal data hindered research potential. This conversation set Ryan on a journey that would culminate in him creating the U.S. Commission for Evidence-Based Policymaking. The work of the commission led to the Evidence-Based Policymaking Act, which was signed into law earlier this year and makes it easier for lawmakers to access data to inform public policy. Of the Act, Ryan said, “Our whole goal is to move away from the ideological fights and focus on what works to get people out of poverty.” He pointed to data access as the means to help identify successful programs and scale the interventions proven to break the cycle of poverty. 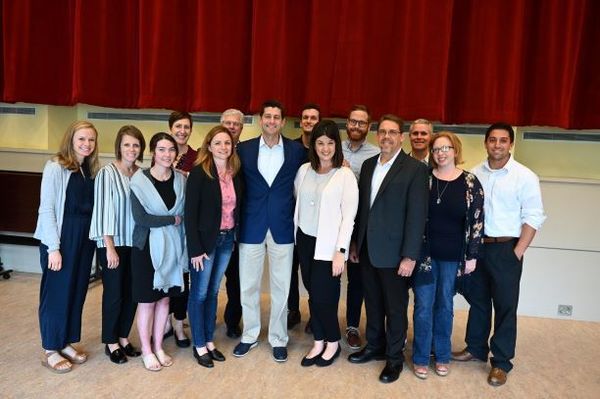 Ryan spoke for around 30 minutes before dedicating an hour for student questions. Twelve students from various majors and political backgrounds asked questions about topics ranging from gun violence legislation to political partisanship.

One of LEO’s undergraduate research assistants, Emily Merola, was the first student to ask a question. She pointed to concerns over the defunding or elimination of government centers of nonpartisan expertise, such as the Congressional Budget Office and the Congressional Research Service, and the increased tendency for lawmakers to turn to lobbying agencies and other special interest groups for information instead. She asked Ryan how this impacts lawmaking, and where the necessary unbiased evidence and expertise will come from for the evidence-based policymaking that he supports.

Merola said that she was grateful for the opportunity to dialog one-on-one with the former Speaker. “Speaker Ryan is a person who held a powerful ‘gatekeeper’ role in policymaking for years, and will surely exert influence on public policy in the future. Because of this, and because I’m passionate about the potential for good offered by evidence-based policymaking, I thought it was important to hear what perspective he will bring to the table when he is advocating for it.”

It wasn’t just the opportunity to speak with Ryan that left an impression on Merola. “I really…enjoyed hearing from the other students who asked questions. They were all thoughtful and challenging, and I was proud to be around other students who care about their government, about public policy processes, and about the decisions being made about both.”

During his remarks, Ryan gave a word of advice to Notre Dame students considering a career in public service: “Be humble, curious. Open your mind. Test your views and don’t use emotions to make decisions.”